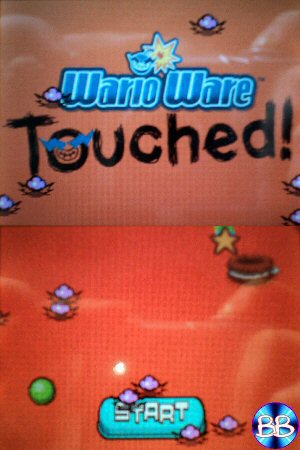 WarioWare started out on the GameBoy Advance, a game that was simple but highly addictive. This was not your normal type of game. The game was made up of over 200 3-second mini games that you must complete, over and over. Each 'level' would contain a different set of mini games based on a theme. The controls only ever required you to hit the 'A' button, or a combination of others. This simple method led to hours of frantic mini game playing.
It wasn't long before Wario made the jump to the GameCube and WarioWare made it's console debut. This was much the same but added a multi player aspect into the game. With up to 4 players playing at once, the mayhem reached even higher than before. Next WarioWare took on a new approach when WarioWare Twisted was released on the GBA, (at the time of writing this, WarioWare Twisted is still yet to be released in the UK). WarioWare Twisted had a built in gyro sensor that would allow you to twist the GBA to control what was going on on the screen. Another crazy idea, and more fun that you can shake a stick at.
The Nintendo DS, with it's touch screen, was begging for a WarioWare game. With a new way to play, there were countless possibilities of mini games that could be implemented into a new WarioWare game. In March of 2005 WarioWare Touched was released in the UK, and the crazy mini game mayhem started all over again.

WarioWare Touched takes the basic game play that has been established in all 3 previous games and adds the DS touch, that being the touch screen and even microphone. Like previous games, WarioWare Touched is made up of 180 all new touch screen mini games. As before these are divided up into categories or 'themes'. So one set may see you poking or just touching the screen, whilst another will require you to draw on the screen. There is even one whole theme based around the microphone.
The main game sees you playing the different themes and to progress you must beat the set of mini games, and the boss battle too. If all you do is just play through the main games, you will only see about half of all the mini games on offer. To see all the mini games, you will need to go back, and play through each theme again, this time though, they will just continue until you loose all your lives. This is the best was to see all the mini games.

All the games are played by using the stylus, or with one theme blowing into the microphone. The touch screen responds well and after many hours of play, I have not noticed any kind of scratches or marks on my screen. Games range from simply tapping the cat the pops out first, to drawing a path for a skier to reach the gate. From unrolling a roll to toilet paper to classic Nintendo games. All the games play out well, and given the strict time limit on each game, it never seems too short a time. That is until you get to the later speeds, this is when the game takes on a mind of it's own. Even though the speed is insane, the time you have spent playing the games at a slower pace, should have given you the knowledge of how to play them at a high speed.
Since the game is so basic in design, you are not going to be getting any issues on the game slowing down or skipping frames. The whole thing just flows from game to game.

WarioWare Touched is not going to win any awards for it's graphics. Whilst the cut scenes have a nice cartoon feel to them and are very colourful, this is the best the the game is going to look. Most of the mini games are made of very simple stuff, a background and the thing that you have to control. Some even look like they were done in 5 minutes. However this is what makes the game so appealing. It's not the graphics that make this game what it is. I am not saying that the mini games are made up of single line drawing, though some are, they just have the basic image that is needed for that game. Saying this though, they are clear, some colourful, and each one fits it's game.
The sound is typical Nintendo tunes and effects. One of the more memorable tunes is the song that plays on Ashley's mini games. it's catchy and weird in one. The other songs all have the usual Nintendo dittyness to them. There is even a record player that you can unlock along with some of the songs, so that you can play them at your leisure. The effects do what they need, each mini game has a sometimes quirky little noise, which sounds clear and right. 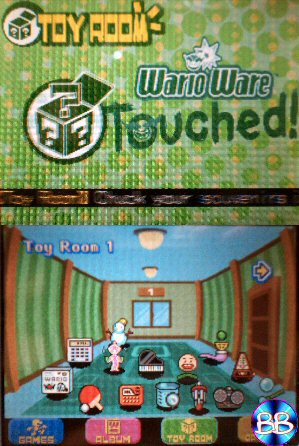 Playing through the main games has never been the main reason to play WarioWare games, it's getting a high score, and unlocking every last thing that keeps you playing. Once you have played a game in the main mode, you will be able to access it in the albums, this is where you are going to be spending most of your time. Each mini game has a target for you to reach, though you only get a token placed by the game to show you have done it, you will keep coming back to get all of them.
To unlock everything that the game has to offer is going to take you some time. There are many unlockable extras in WarioWare Touched, and many of these are toys. Whilst the majority are things that you will look at once, there are a few that will keep you hooked. these toys range from a piano, which you can play by tapping the keys, to a game that involves you pulling on a birdlike things tail, which you flick at approaching enemies, all to keep 4 flowers safe.
There are some extra modes of play to unlock too, these are based on the main game, but have a slight twist on it. One sees you playing every possible mini game included, while another sees you starting at a crazy speed, with only one life. You will find yourself playing these more than the regular modes, as they add a little extra to the game.

Unfortunately there is one thing missing from this game, a multi player mode. I don't know the reason for not including this, but with the GameCube version including it, this would have been a perfect addition to the game. Even with out this, the game is still going to last you a long time. You may rush through the main game, but unlocking everything and beating all the targets for each game is going to keep you busy for some time.

The WarioWare games have been about one thing, fun, fast gameplay. WarioWare Touched continues that on the Nintendo DS. WarioWare Touched is one of the first DS games that really puts the touch screen to use, and even uses the microphone as a means of input. The vast amount of mini games and extras to unlock will keep you coming back for more, and breaking your old records will give you something to do on those long journey's. WarioWare is a all round solid game that only really has one negative point, the lack of any multi player mode. This would have made this a must have party game and given it that something extra that it needed.

With that said, this game most definitely deserves a place in anyone's DS library. 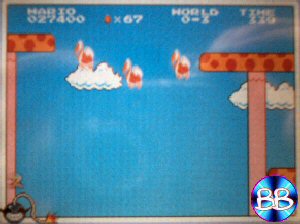