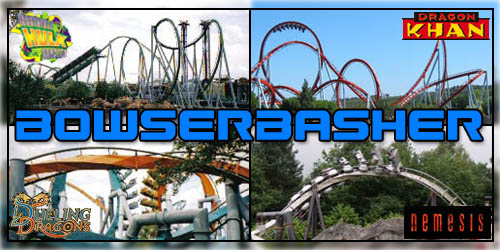 On this page you can find some info about me, BowserBasher.

About the name BowserBasher. I started using it on a computer games forum. As I have played so many Super Mario Brothers games and beaten up Bowser more times than I can remember, I thought that I wanted something that related to that. So I thought that 'Bowser' had to be in there, then I decided that it would be cool to use a second word that also started with 'B' to get the feeling of alliteration. 'Bashing' came to mind, I played around with that for a while, then finally settled on 'Basher'. I then put the two together, and the finished result was 'BowserBasher' (note the two capitol 'B's). Then as I started signing up to other forums, I just decided that I was going to use that name there too, instead of coming up with something relevant to the site. I thought that if I used the same name all over the place, it would be easier to remember my login name, and I may be recognized on other sites too. That is how the name came to me. So look for BowserBasher wherever you go.
Registering BowserBasher.com was just the next logical step. And here you are now.

I love playing computer games and my personal choice is Nintendo. I have been a fan since the days of the NES. I own all the systems, including a Virtual Boy. I love taking a few moments a day to just sit down and play on my 3DS, try to beat a high score. I am not so much a fan of PC gaming, but I do love playing RCT/RCT2. You can view my entire Games Collection by following the link. (I don't visit IGN any more, so this is wildly out of date).

What a find! On Saturday 30th January 2005, I was able to pick up two amazing bargains. First a boxed NES system, with two controllers and all the leads. It even had the polystyrene in there. The second was even better. A complete boxed Virtual Boy, with two games. I now have a wonderful collection of Nintendo consoles. If only I had the room to display them all.

I have developed a love of graphic design, and web design and my site is the culmination of both of those. All the graphics on here are made by me, apart from a few game logos. I have taught myself to code in HTML, PHP and CSS, with a little help from a few people along the way. I love creating stuff in photoshop and following tutorials to get the best out of things. Most of the images I show on this site I have designed using such tutorials.

I have been a fan of the WWE for almost 20 years. I remember starting to watch around the time of Survivor Series in 1992. As I live in the UK I have not managed to attend as many shows as I would like to. I attended my first show in 2002, WWE InsurreXtion, at Wembley arena on May 4th. Since then I have been to a second show, the SMACKDOWN! Tour de Force 2003 show. I was at the show in Sheffield on the 11th May. My third show, SMACKDOWN! Passport to Pain tour 2003, I went to the show in Birmingham on the 11th October. I have a page dedicated to pictures from the shows here in The Lair.

I had the great pleasure of being one of the many fans that got tickets to the first ever RAW TV taping in the UK on the 11th October 2004. I had great seats, and the show was amazing like always. We blew the roof off the M.E.N.!

Other programs that I enjoy watching include The Simpsons, Angel, Buffy, 24, Tru Calling, QI, Bones, Fringe, V, South Park, Mythbusters, Dr. Who, along with many others.

I love watching films. I have an ever growing DVD Collection, I have over 200 DVD's, and it grows ever larger. I don't really have a favourite film as such, I only buy films that I really like. So therefore all my films are my favourite in their own way. Most of my new films are now bought through iTunes and not on DVD, though I still buy a few that I really like on DVD.

I have met three stars from The Lord of the Rings. Sala Baker, Jed Brophy and Lawrence Makoar. Pictures and a recollection of the time can be Seen Here.

In June of 2012 I was introdused to Geocaching by a friend. I looked into it and thought it may be something that could be fun to do. I signed up to Geocaching.com as a basic member to try it out on the 23rd June. On the 26th June I found my first cache and have not looked back.
On the 13th of July I upgraded to a premium account and have been even more hooked. I recently placed my first caches, 8 in total, and am really enjoying doing this. It has taken me to a few places in town that I didn't even know existed and is starting to take me a little further away. I urge anyone to give it a go. I'm sure you'll like it too.

Roller Coasters! Everyone loves these. Well I'm no different, I love them too, and have been trying to get to as many theme parks as possibly, so that I could ride as many as I could. If only trips to America were cheaper, I would go there too, but as of now, I stick to the ones that are here in the UK. I have on-ride photo's of most of the roller coasters that I have ridden. They can be found on this site.

WooHoo! In September, 2004, I took a 17 day holiday to Orlando Florida, and had the time of my life riding the many roller coasters there.

My love of coaster inspired me to make the logo/banner that you see at the top of the page. It features my favourite coasters, along with the name BowserBasher. I have recently updated it to feature two new coaster that I rode whilst on holiday in Orlando. It now features, The Hulk Coaster (top left), Dragon Khan (top right), Dueling Dragons (bottom left), and Nemesis (bottom right).

Last, but not least, here is what I look like: 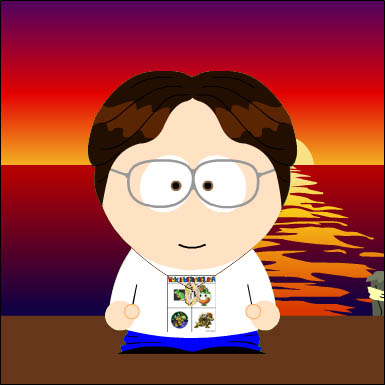 Well that gives you a little insight into who I am, and what I like. Thank you for taking time to read this.