To his many fans he is known as K.K. Slider, but in his native japanese, he is know as Totakeke. What ever you call him, he is one cool Pooch. K.K. Slider is the traveling musician that likes to play a tune for anyone that takes the time to talk to him. In Animal Crossing he would show up by the Train Station on a Saturday night, and belt out a tune for anyone interested. Continuing on in the same fashion, K.K. Slider continues to belt out tunes in Animal Crossing : Wild World. Although, instead of playing in the open air, he has a set in the local cafe, The Roost, located in the museum. Again, every Saturday evening, you can request a song, or just let him sing one of his favourites. In each game, after his song, he will give you an aircheck so that you can listen to it back in your house.
K.K. Slider has returned to his adorning fans once again with the release of Animal Crossing : City Folk/Lets go to the City. Once again, you will find him in The Roost on a Saturday envening. K.K. Slider will now play to you and your friends visiting from other towns. He won't give you an aircheck when you are in another town, but you can have him play as many songs as you like.
On this page you will find Wallpapers that I have made, and a list of all the songs that K.K. Slider will play for you in Animal Crossing, Animal Crossing : Wild World and Animal Crossing : City Folk/Lets go to the City. In each game there are a few songs that he will only play if you request them.
The wallpapers are made entirely by BowserBasher, and are intended for personal use only. You must not post these anywhere else or claim them as your own. 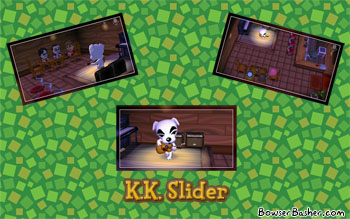 Copyright ©2004-2022 BowserBasher.com. All rights reserved.
Animal Crossing and Nintendo are registered trademarks of Nintendo of America.