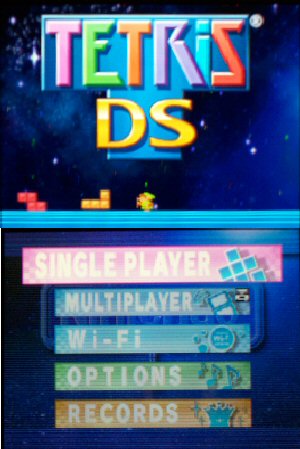 Hands up if you don't know what Tetris is. 1...Ok, you need to leave the room. If you don't know what Tetris is, then you really must be living on a different planet, even then, they would probably have made a Tetris in some form.
Tetris is probably one of the most well known titles to ever be made. It has spanned every gaming platform and beyond. The premise is simple, probably the simplest in history. There are blocks falling in to a container, and you have to stack them so that you complete rows to make them disappear. Every time you clear ten lines, the game moves up a level and gets faster. This continues until you have no room left in the container.

The first instance of Tetris on a Nintendo console was on the original GameBoy, and this helped it become what it is today. The game spawned may sequels, many of which tried to add something to the formula, bombs, in Tetris Blast, as an example. But none of them ever really captured the pureness of the original. Tetris DS goes back to its roots, and sticks to the original idea, falling blocks and your skill.

Tetris has always been about the gameplay aspect, and it doesn't fall short. Nintendo have kept the controls as they are, there are no attempts to mess with the formula. (Though one mode does use the touch screen), it's still simply using the D-pad to move left and right, with down moving your block faster and up as a hard drop, placing your block at the bottom of the screen straight away. A and B are used to spin your block clockwise or anti clockwise.
The game moves the blocks around faster than it's former incarnation, meaning you can get a block from one side to the other quicker in the DS version. This does make things slightly easier, if you are quick enough. Tetris DS also brings in the infinite spin. What this means is, that when a block can go down no further, you are able to keep it spinning for as long as you can. This means you can essentially pick a spot out, whist spinning it on the spot. However, this does not work in multi player games. 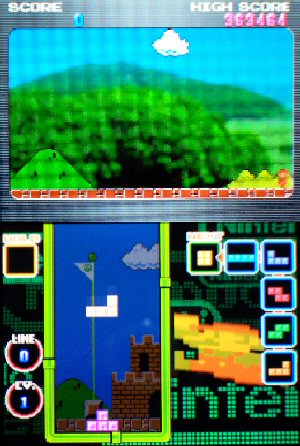 Tetris DS has five additional modes to keep you busy. Along with the standard marathon mode, there is a Touch mode, Puzzle mode, Push mode, Catch mode, and Mission mode.
Puzzle mode, sets you the task of clearing a set grid with only a few pieces. Whilst a nice time waster, the puzzles are not that challenging. Touch mode takes the general idea and adds this twist. The blocks are all piled up on the screen and you have to clear them by moving them across the screen. This time, the blocks fall into place if there is nothing under them, and are cleared in the same way was normal. Push mode is probably one of the better new modes. It is just like the marathon mode, except now a second player is playing opposite you. The idea is to push blocks into their screen by completing lines on your screen. Mission mode, sets you tasks to complete in a certain time limit. Such as clearing certain lines using certain blocks. Lastly there is catch mode. This involves a totally new way of play8ing. In this you control a block that you rotate to catch falling pieces. blocks are cleared when you group together 4x4 shapes.
You may find yourself playing on some modes more than others, but that is what is to be expected, some are just better.

Tetris has never been about the graphics, though this game does go that bit further and add something to them. Graphically this game does what it needs to. The bottom screen is where all the action takes place, while the top screen plays host to a scene from one of the many Nintendo franchises that are present. From Mario to Zelda, you can watch these is you have a second to tear yourself away from the intense action below. Everything is crisp and clear, and you are not going to be confusing any shapes with each other. What can you do to a game that is basically blocks falling.

The sound is a must for all Nintendo fans, each level of the main game comes complete with it's own rendition of a famous tune from the past that accompanies the action of the top screen. The usually effects for spinning, clearing lines and menus are all in, and do what they are supposed to.

You will at some point always find your self going back for a another go on Tetris, this is what makes this what it is. You can easily spend hours on the main marathon game in one sitting. The extra modes can eat away the clock too. Although there is one aspect where this games comes into it's own, and will have you coming back to. The online play. Now for the first time you can play against someone the other side of the word. Modes available are two player push, two player standard and four player standard. The last is where this game adds yet another fun aspect, items. Now before you all moan and shout, it actually works well. The items are the usual mix that you see in Mario Kart, from your bananas to lightning bolts. Simple items like the shell, will clear a few lines of the bottom of your screen for you, while the lightning bolt will give you infinite straight pieces for a short time. Ideal for racking up those lines. Your ranking is all saved and kept the next time you play.
The two modes that you are probably going to be going back to the most are the marathon and Wi-Fi games. These two alone are well worth the price of the game.

If you have at one point played Tetris and liked it, you should buy this game. The new modes are fun to play, and the classic marathon mode is still the most fun you can have with falling blocks. This is one game that you are going to constantly go back to even after all you other games have run their life. Be it a quick blast in single player, or a fun multiplayer round with up to 10 people locally, this will never get old. Tetris has returned to the handheld and this time it is a true winner. 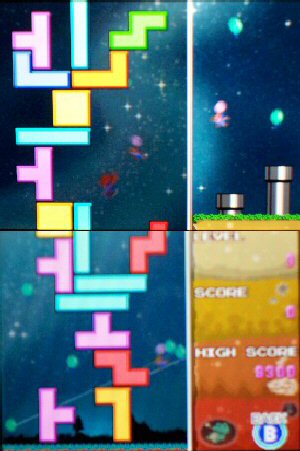