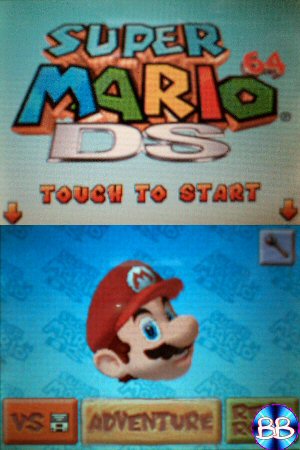 Super Mario 64 DS is a updated version of the classic Super Mario 64 that was released on the N64. Originally released in released in 1996 (May 1st 1997 in Europe) it was a instant hit with fans everywhere, and in some instances was declared the greatest game ever. It was the first Mario game to venture into the 3-D realm and take on a whole new dimension in gaming thanks to the Nintendo 64 controller, which sported a new analogue thumb stick for more precise movement.
Super Mario 64 DS is, as a whole, a fully fledged remake, though there are differences between the two not just in terms of graphics and controlling Mario. The main difference between the games is that you now have the ability to play as either Yoshi, Mario, Luigi or Wario.
The game still has the same levels and battles with Bowser, although now each level boasts an extra star. There are also many extra secret stars in the game which takes the total from 120 to 150. To get them all, you will need to use each of the four characters throughout the games 15 levels and castle surroundings.

Mario 64 DS is not just a port of Mario 64. There are many new secrets to explore. From the addition of the new characters to the all new mini games that have been included. These are obtained by catching the Rabbits that are running around the castle. There are 9 Rabbits for each character to catch, these adds up to 36 all new mini games that can be accessed either in game or from the games menu. The games range from simple card games, memory games, to action games. All these games use the Nintendo DS's touch screen to play. The games are fun to play in 10 minute bursts, but they are not going to keep you hooked for hours on end.
As mentioned, the game is not a straight port, and although the majority of the game remains unaltered there are areas that have been changed. One of these is on Snowman's Land. The Igloo now holds a new challenge for players to solve. The other main change of course is the addition of the new characters. You start the game as Yoshi, and through the course of the game you unlock the other's. To do this you have to "rescue them" from mini bosses in 3 new mini-levels. There are also a number of stars to get in each of these levels. Once you have rescued them, you are able to use the block switches which hold the hats. Each character has a unique ability when wearing the hats from the blocks. Mario now only wears the Feather cap, Luigi is able to pick up the caps which allow you to walk through walls, and Wario can become Metal. 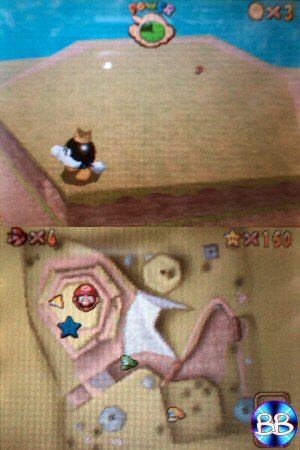 The action takes place on the top screen whilst the touch screen is home to the map and Touch Mode controls. This works well, and at no time are you overrun with what's going on on both screens, a quick glance at the bottom screen is all that is needed at times.
What made Super Mario 64 such great fun was the control you had over Mario, with the analogue stick you could do almost anything. Unfortunately the DS does not have this, and this is where the game falters. Nintendo have tried to emulate the controls using the touch screen as a substitute, but unfortunately is just feels lacking. The alternative is using the D-pad and face buttons to control Mario, but this just doesn't work for the game. If you can get to grips with the touch screen controls, you can control Mario, and control him well, but you always feel that you are not in total control. It's the one flaw in an almost perfect game.

Graphically, Super Mario 64 DS is an improvement over is N64 counterpart, the characters have been given an overhaul and look smoother and move cleanly. The surroundings appear mostly as they did in the original, though there are some improved surfaces. This is no bad thing as the game was beautiful when it was released.
The music returns and everyone that remembers the tunes from the original, will be right at home here. Each level has it's theme music in place, but now it has a little more oomph to it. The main title screen music from the original has been injected with a little beat and it just seems a perfect addition to the themes. Every sound byte remains, from Mario's woohoo's to the little ditty that players when you get a star. This is Nintendo at it's best.

If you have ever played the N64 version, you will be able to play through this game without major problems. The new areas and stars may take a little longer, but should not be any hassle to a Mario veteran. If this is your first time round, then take a little time and enjoy the game for what it is. Getting enough stars to face Bowser in the final battle shouldn't take you long, as there are plenty of stars to get to the 70 that you need to face Bowser. After this completing the rest is going to take as long as you want it to. If you put in the time, it should not take you long, add in all the mini games to collect, and you are looking at a game that will keep you busy for a few weeks to get everything. After the single player game, there is the multi player mode. This should keep you coming back for more with your friends. If you are a single player, you may find the game gathering dust after you have completed everything though.

Super Mario 64 DS is a fine example of what the Nintendo DS can handle. As a launch title it is only fair to say that this is just the tip of what we will see on the DS. As time goes by and developers get used to the hardware, we will see games surpass the quality that is shown here.
The game is let down only be the control methods, whilst neither option is perfect, using the touch screen is by far the better option of the two. You will have fun with this until you have completed the single player mode, after this, whether you play again depends on if yo have friends or not. The mini games are a nice addition, but at the end of the day, they do not hold your attention for more than 10 minutes at a time.