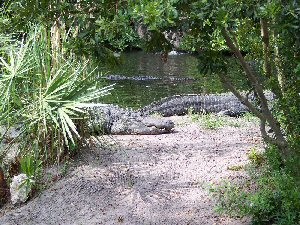 Hurricane Jeanne had passed, the power was back on, though there were still no TV stations. With that, I decided to just go out and have some fun on International Drive. I had driven down here a few times, and there were some places that looked interesting to me.
The first stop was Ripley's Believe it or Not. Lots of weird, strange and interesting things to see in here. A lot of optical illusions too, though I did know about most of them, and the answers to them. There were a few that I didn't know though, the same with many of the other 'facts' they had on display.

Next, the first of a few Adventure Golf courses. This one was Pirates Cove. This consisted of 36 holes over 2 courses. A few challenging holes, but it was a very nice course with a pirate theme. I scored a 39, or -1 (one under par) on Pirates Cove and a 41 or -2 (two under par) on BlackBeard's challenge Course, the second of the two courses.

After my round of golf, I went to WonderWorks. This was a bit like Ripley's Believe it or Not, only more interactive, with more game type attractions. One interesting one was the Roller Coaster simulator. Unlike the many motion simulators, this one actually has more movement. Spinning through 360° at times.

I really liked this place. Some fun games and plenty to do. I just had to lay on the Bed of Nails that was there. It really isn't bad at all.

(nine over par) on The Lani, and a 40 or -1 (one under par) on The Kahuna. Two fine courses and the spray from the volcano made for an interesting mist effect, and was nice to cool off in the muggy weather. I got caught in a downpour halfway round, but that didn't stop it from being fun, it was quite refreshing too.

After I had finished the round of golf, I went and had a walk round Pointe Orlando, a shopping complex, for a while before heading back to my hotel.
A quick jump in the pool, as it had been so muggy, before dinner. It had been a fun day and one that I had not planned on doing. Only because of Hurricane Jeanne, had I decided to do this today.