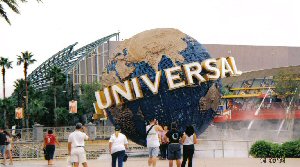 I decided to start using my Orlando Flex Ticket today, and first up would be Universal Studios. I got to the park at 9:00am, parked and headed to the entrance. Once inside I got a map and started to plan my route. First up was Shrek 4-D.
This was great, the 3-D is amazing and you really do feel as if thing are coming out at you, with the added 4-D elements, it is even better. The story bridges the gap between the two movies, and it does do well in that it does tell that part of the story.
After Shrek 4-D, I headed towards Twister, based on the film of the same name. Twister is a tornado experience where you are put in the middle of a tornado. 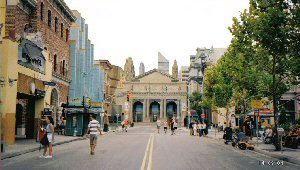 I thought this was great, when the wind and rain get going, stuff starts to fly round, including a cow, you get some feeling of what it may be like.
Onwards I went, and soon came across Jaws. Jaws must be the oldest ride in the park, and you can tell. Whilst the ride is fun, when you see Jaws up close, he seems dated. This does not make it any less a great ride though.
I continued round the park and soon found E.T Adventure. This is very much a family ride aimed at the young ones. It's still nice though and having your name spoken by E.T at the end is a nice touch. I came out from E.T Adventure and was heading to T2 3-D, when I saw the Universal Horror Make-up show. I decided to stop off here first. This was very interesting and quite funny too. Looking at the history of make-up in films and how they are accomplished. 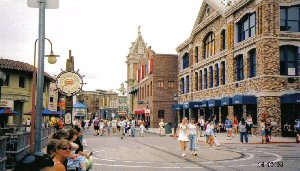 Now I headed towards Terminator 2 3-D : Battle Across Time. Another stunning attraction. The mix of live action, special effects, and 3-D film make this even more amazing. This may be the best in the park.
Time for a snack before I make another trip round. First stop this time was Earthquake. Before you get to the main ride, you are treated to a look at how weather effects are done in films. Some interesting facts too, did you know, that to get rain to show up on film, they add milk to the water? The ride is great too. You are in a subway which stops at a station. Then from that point on it's an earthquake. With tons of water flooding in, flames bursting up from the ground, and lorries falling from the street above, this is what an earthquake may be like. 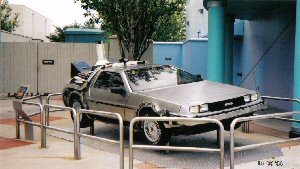 The DeLorean from the Back to the Future films

Back to the Future : The Ride. This is a motion simulator with the simulator being the DeLorean from the films. It's a fun ride taking your from the age of the dinosaurs, right into the near future, all in chase of Biff, who has stolen another DeLorean.
I now headed towards Men In Black : Alien Attack. This is one of those rides where you go round on a pre-determined track and shoot at things to get points, (Aliens in this case). It's a very advanced ride and good fun. I did very poorly though.

It's says that the score that you get has an affect on the ending of the ride, but I didn't notice anything.

I walked around some more, taking some photos, before I decided to start heading back. Overall this was a great day out and the reason that I wanted to come here, to have fun days like this.

A couple of notes:

By the time I left, I had spent around 7 hours in Universal Studios.
A great day out.